The appointment of Allegra Stratton as the government’s official spokesperson must not result in an erosion of journalistic access to ministerial figures, the editor of ITV News has said.

Speaking to the Society of Editors’ (SoE) Executive Director Ian Murray as part of the Society’s third In Discussion With…series of keynote talks as part of the SoE Virtual Conference for 2020, Corp discussed topics such as the role of broadcasters and polling during the recent US Election, the importance of opinion in journalism and the necessity of diverse representation on and off screen, the role of digital platforms in attracting new audiences and ITV’s priorities for the year ahead.

On the subject of the recent appointment of Stratton as the government’s official spokesperson, Corp said that while she had “great respect” for Stratton as an individual and journalist, it was important that the new role was “in addition” rather than as an alternative to access elsewhere.  Moving forward, she said, any reduced access to ministerial figures would become an issue for the broadcaster.

She said: “Obviously we know Allegra and have great respect for her from her time as a national editor. She is very bright, a great journalist and very passionate about everything she does and I think she will do it with the utmost professionalism. It is not for us to say “You shouldn’t be doing this or you shouldn’t be doing that”, we would welcome anything where we get access to ask questions. The thing for me would be that it cannot be at the expense of other access.”

Appointed as ITV News Editor in October of this year, having been Acting Editor for three years prior to this, Corp is in charge of the editorial output of ITV national news, TV and digital as well as oversight on ITV News-produced programmes. Previously she was Editor of 5 News and ITV London.

In respect of journalistic access moving forward, Corp said that newsrooms had seen reduced access to the Prime Minister over the past year and it was hoped that Stratton’s appointment would not result in a similar attempts to reduce access elsewhere.

“Certainly we would like to get more access to the Prime Minister. We seem to have all had less access to him over the past year. It was very disappointing for everybody during party conference where he didn’t do the usual sit-downs with political editors.”

Unlike in the US where channels were free to be partisan in their coverage, Corp said that broadcasting regulations in the UK would prevent similar coverage at home.

She said: “We are still regulated and we are so different to broadcasters in the States because we do have this regulation. Certainly as PSBs (Public Sector Broadcasting) we have this obligation. We don’t want to go down that route but I don’t think we could if we wanted to. Certainly for ITV, our strength is our independence and impartiality and that is working because look at our viewing figures.”

The hesitance by US broadcasters to initially call the presidency in the immediate days after the election, had also presented challenges to UK broadcasters Corp said and this was likely, in part, due to a lack of confidence in polls in recent years.

Corp said that newsrooms in the UK had also distanced themselves from polls in recent years.

She said: “I think we are all using fewer polls – certainly in the last election I don’t think ITV did any apart from the exit poll. Sometimes we will do more nuanced ‘how do people feel about certain subjects’ type-polling but voter intention I think we have all been moving away from.”

Looking to ITV’s coverage during the Covid-19 crisis, Corp said that she was “very proud” of what her colleagues had achieved during the pandemic and she disagreed with the accusation that the broadcast media in the UK was perceived as having followed the government line more in its coverage in comparison with the print media which had been more sceptical of government messaging during the pandemic.

She said: “It has been a challenge. I am really proud of how we responded because like so many people we had to change the way we worked almost overnight.

In respect of ITV News’ priorities for the year ahead, Corp said that diversity both on and off screen and reaching new audiences through digital channels was a focus for the broadcaster.

Looking at how best to target new audiences, Corp said that ITV was focusing on reaching out on different platforms. Research by the broadcaster had found that The Telegraph was a brand particularly popular among teenagers, she said, because young people were seeing great Telegraph content being produced on platforms such as Snapchat. ITV had since also moved onto platforms such as Instagram and Snapchat as a means of targeting teenagers via its own innovative video bulletins, she said.

She added: “We launched a service for young people called The RunDown. It launched initially on Instagram but it is now on Snapchat as well. During corona, Snapchat actually asked us to come on to the Discover page to give it more prominence because they knew we were reaching those people who needed to hear some of the government’s health messaging. That is now flying, we are reaching 11 million views a month and young people are consuming that. It is a question of going to them really rather than trying to assume that they will come to us.”

The full In Discussion With…interview with Rachel Corp is available to watch here from 12 Noon on Thursday 26 November 2020.

Details of all the Society’s remaining conference talks and debates alongside how to register for the free events is available here.

The discussion was able to take place thanks to the sponsorship of Facebook Journalism Project and Camelot.

Camelot has sponsored the Society of Editors since 2001 and a short video from their CEO Nigel Railton played at the beginning of the session. If you would like to discuss anything with Camelot – story ideas, ways to improve working together or anything else – please let the SoE know and we’ll put you in touch with them. 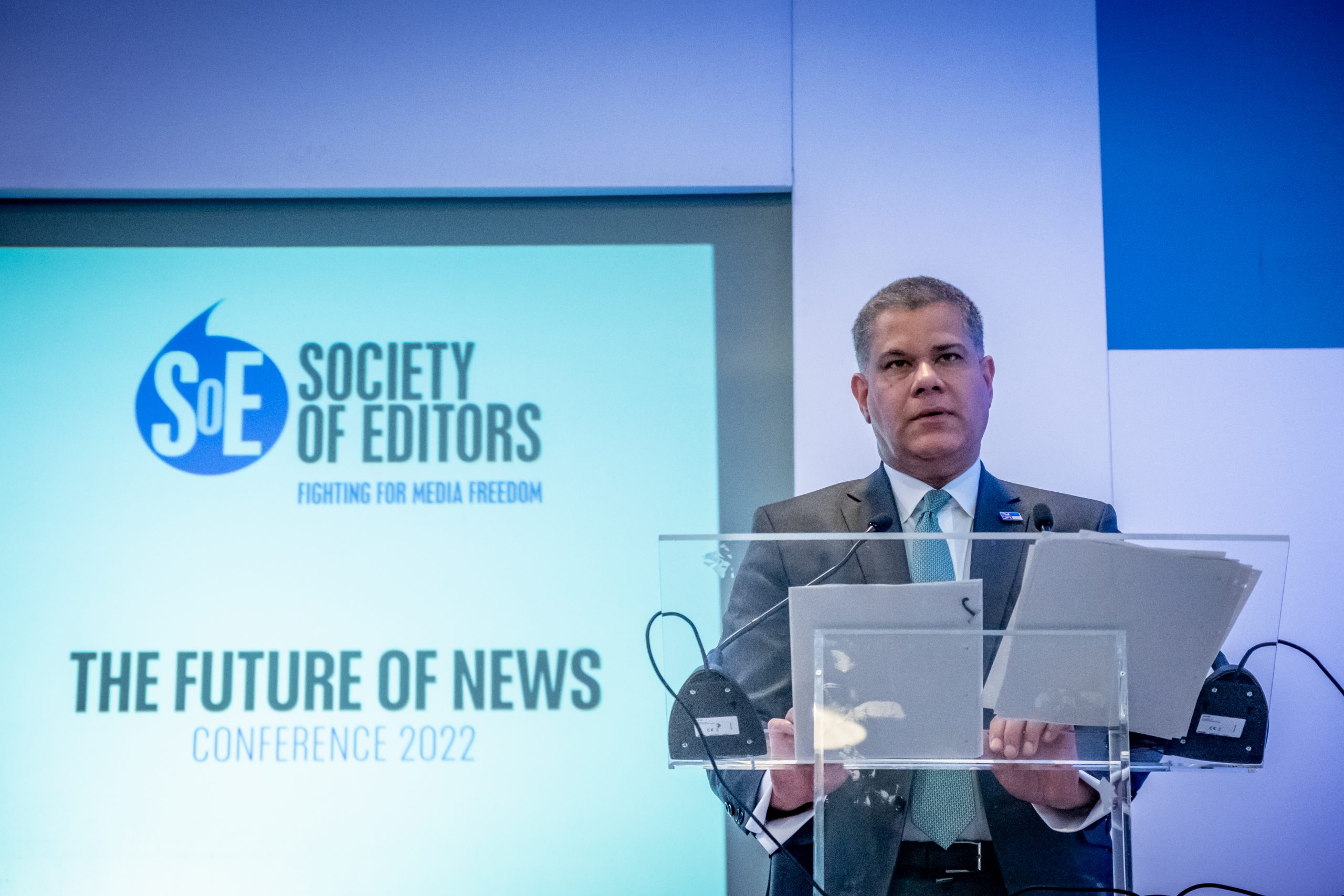