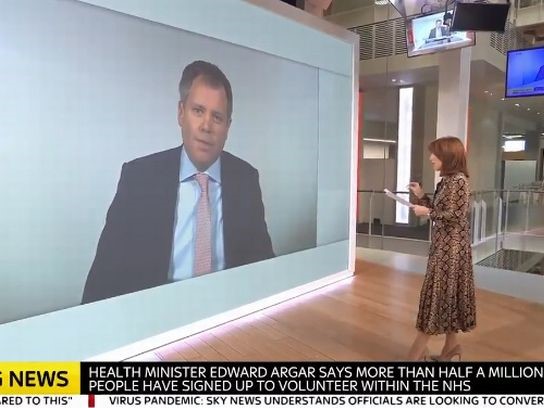 Sky News has a “serious and deeply-felt obligation” to document how the coronavirus crisis is affecting the people of the United Kingdom and the rest of the world, its Head has said.

Writing in a blog post on the broadcaster’s website, John Ryley, Head of Sky News, provided an update on how the broadcaster is operating amid the crisis. Alongside outlining the coverage that viewers could expect to see, he said that Sky’s journalists recognised the vital role they had to play in keeping the public informed and the need to hold decision-makers to account.

He said: “We recognise the vital role we have to play during this crisis, ensuring you are able to read, watch and listen to accurate non-stop journalism and clear analysis across all our digital, television and audio platforms.

“Sky News has a serious and deeply-felt obligation to document how this crisis is affecting the people of the United Kingdom and the rest of the world.

“It’s never been more important to tell our audiences what’s going on, and to hold those in authority to account for their decisions.”

Like many journalists across the country, Ryley confirmed that only essential staff who can’t perform their roles properly from home are coming to work while scores of journalists are now using technology to work from home to keep the news flowing.

Sky journalists would continue to “work tirelessly” to provide clarity on the crisis, analyse the scientific facts and “put people at the heart of” its coverage, Ryley confirmed.

He added: “We know you have questions, and demand authoritative, accurate answers. Every day we’ll listen to them and use our experts to give you the clarity you need.

“Finally, we promise to remain upbeat. We’ll tell stories of hope and endeavour across Britain and the rest of the world.

“We are in this together.”