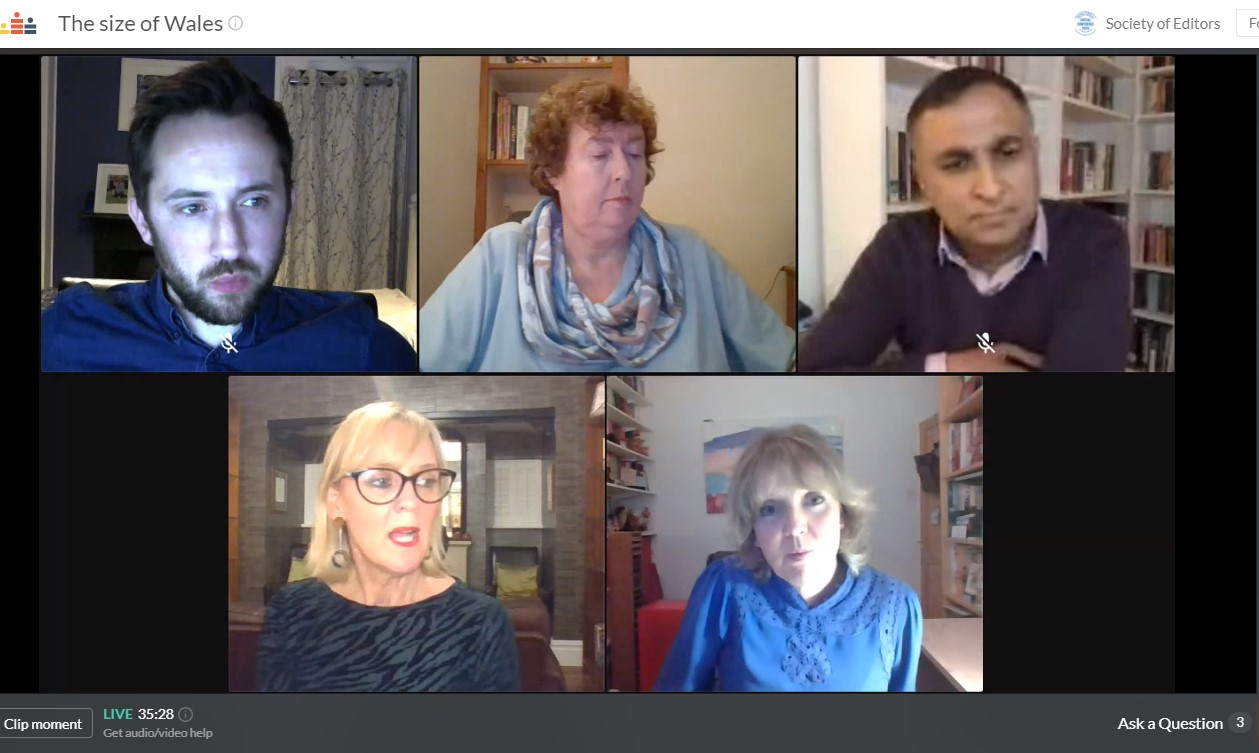 It is the responsibility of the media both in England and Wales to educate the public on the democratic position of the devolved nations, a leading panel has urged.

Discussed last night (Monday 16 November) as part of a panel debate looking at ‘The Size of Wales’ as part of the Society of Editors Virtual Conference for 2020, Paul Rowland, Audience and Content Director at Media Wales said that, when considering media coverage of the Covid pandemic, it was important, alongside titles based in Wales, for titles produced in England to also report on Welsh decision-making comprehensively and accurately. In comparison with Scotland, he said, Wales did not historically have a lot of Welsh-based titles and, as such, the responsibility also lay with the English media to accurately reflect the way decisions were being made at a devolved level.

“The issue is often looked at in the prism of newspapers and ignores the fact that the internet exists. Wales Online reaches almost 9 million people every month – it is a very powerful voice for Welsh people within Wales and non-Welsh people about Wales from outside of Wales – but it is the whole media who is responsible for educating people about the democratic position in Wales and that requires television news and the written press outside of Wales to give Wales the space it needs and to understand and report accurately the nuances involved.”

Rowland’s comments were echoed by Ashok Ahir who said that the Covid crisis had highlighted the role the UK media had played in educating the public on devolved decision-making.

He said: “Not just in terms of the Welsh media but the UK media also has now had to reflect the politics of Wales, the politics of Scotland and the politics of Northern Ireland in a way that has never happened before. [This was not just in respect of] trying to decide who is doing a better job but in reporting what is happening either in the Senedd or by what is coming out of a government press conference.

“I’ve heard clips of Vaughan Gething on Classic FM and that would never have happened a year ago. That is not a bad thing if the one Covid politician they have for a bulletin at one o’clock is Vaughan Gething or Mark Drakeford or Arlene Foster. I think that is great that we are now being able to tell the rest of the UK that we live in a devolved space.”

Helen Mary Jones agreed that the media’s reporting of decisions made in Wales had made visible the Welsh government’s ability to take a different approach to Westminster.

“The idea that Mark Drakeford, who is a consummate unionist, would be cynically using his powers to make some covert Welsh nationalist call is ridiculous. He made decisions that he hasn’t really wanted to make because that is what he thought was best and that was what he thought would keep people safe.”

Carolyn Hitt agreed that the pandemic had presented an opportunity to define the role of the Welsh media.

She said: “One of the consequences of what has happened in the past few months is defining the role of the Welsh media. Time and time again I have sat next to my father – particularly in the early days of the virus when something would come up and I would say “no, that is just in England” – and I think it is a real opportunity for all forms of Welsh media. I have seen social media also take a lead in debate and conversations – in an intelligent way as well as a toxic way – there are also a lot of smaller online based news services which are talking about Wales.”

On the subject of whether Covid had made it more difficult for journalists in the devolved nations to give clarity to audiences, Rowland said that while the uniqueness of the situation had presented issues early on during the crisis, journalists both inside and outside of Wales had learnt a lot about the devolved powers across the nations.

He said: “In the very, very early days when lockdown was announced we were scrambling. It was new and nobody had experience of reporting on devolution in respect of national lockdowns. We were scrambling to understand what related to Wales and what didn’t and I’m sure lots of other newsrooms were. I think the net result of that progress seven months on is that we have learnt a lot as a set of journalists in the media in Wales, the journalism industry has learnt a lot about devolution and I think there is now a commitment as you can see on a number of platforms to report on Wales with the nuance it requires.

The full video of the debate is available for catch up here.

The debate was able to take place thanks to the sponsorship of Facebook Journalism Project and Camelot.

Camelot has sponsored the Society of Editors since 2001 and you saw that short video from their CEO Nigel Railton at the beginning of the session. If you would like to discuss anything with Camelot – story ideas, ways to improve working together or anything else – please let the SoE know and we’ll put you in touch with them.

Details of all the panel discussions in the weeks ahead alongside how to book for the keynote discussions can be found via the Society website here.