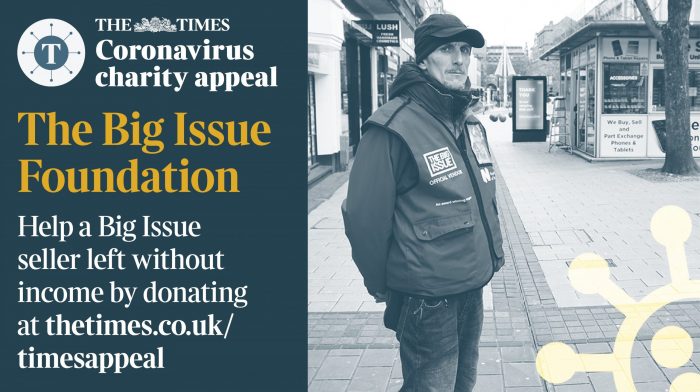 Reader donations for The Times Coronavirus Charity Appeal have reached £776,143 – a record figure in the newspaper’s history.

The appeal will support the charities Family Action and The Big Issue Foundation to assist those hit hardest by the coronavirus pandemic.

The record donation figure was achieved in 27 days – half the duration of the annual Christmas appeal which its previous record had raised £772,638 in 2018.

The paper has raised £446,525 (including gift aid) for Family Action supporting poor and disadvantaged families and adults facing isolation, and a further £329,618 for The Big Issue Foundation to assist the some 2,000 vendors of the magazine whose street sales have ceased during the crisis.

The Times recorded its largest daily donation of over £100k on April 6, incidentally the day it gave a despatch on support worker Josie Walker and her family who rely on support from the Family Action food club in Manchester after the lockdown began.

The paper says donations are being transferred to both charities weekly rather than monthly given the urgent nature of the crisis.

Today, Press Gazette has reported that UK news publishers have helped raised an extraordinary £7m in the fight against Covid-19.

Over the last few weeks, the Society of Editors has been tracking some of the appeals set up by newspapers both national and regional.

Donations to the Times Coronavirus Charity Appeal can be made at thetimes.co.uk/timesappeal